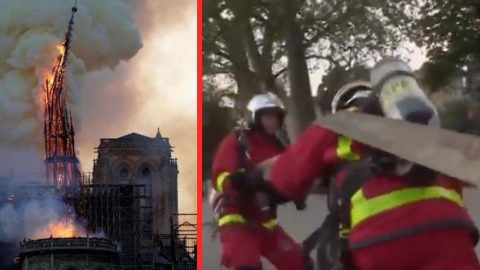 The Blaze That Shocked The World

In the evening hours of April, 15th, 2019, Notre-Dame, the famous 12th-century cathedral in Paris, France, caught fire at about 6:00 p.m. local time. As tourists were waiting to get into the building, the doors were abruptly shut as an alarm went off indicating a fire has broken out. Everyone already inside the cathedral was also immediately evacuated.

The Paris Fire Brigade, whose firefighters battled bravely though the night to put out the blaze, has just released the dramatic footage of the incident.

In an intimate look, firefighters are seen rushing towards the consumed centuries-old building, carrying a hose. For hours, they used electronic cherry pickers to blast water. Other clips reveal just how devastating the fire was.

The damage was disheartening, but thanks to the firefighters’ efforts, the structure of Notre Dame and many relics have been preserved, including a Crown of Thorns saved the the fire department’s chaplain.

Notre Dame – Through The French Revolution and WWII

I find it fascinating, and perhaps even prophetic, that the high altar of Notre Dame was virtually untouched. The “Cranmer table” However, got pummeled by the collapse of the roof. pic.twitter.com/XKtJUSBHDO

Besides, the Notre Dame is not a stranger to destruction. With a foundation laid in 1163, the symbol of political , economic, and cultural power in France outlived world leaders, the French Revolution, and tolled its bells to end WWI and WWII. One family even expressed their connection to the building through their father having been a WWII sniper on the roof.

“He said that it was an incredibly amazing and wondrous building and he could feel the history around it. He often would look up at the sky and wonder how did he get here? On the roof of Notre Dame…He would pray that the Germans wouldn’t destroy it because it was so beautiful.”- Stella Herzig about her father, Joseph Rizzo, Company A, 146 Engineer, C Battalion of the U.S. Army

Thank you, Pompiers de Paris, for fighting bravely to save the Notre Dame!