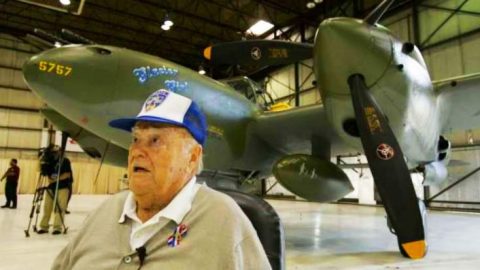 In July of 1942, a squadron of eight P-38s took flight from New York City to London to help Great Britain combat the Axis Powers. During the 4th leg of their trip as they traveled from Greenland to Iceland, weather conditions worsened sending them off course and the squadron was forced to turn back. After running out of fuel the planes made emergency crash landings on the Greenland icecap and the pilots were rescued shortly after leaving behind the damaged P-38s.

50 years later members of an excavation crew called the Greenland Expedition Society discovered the planes and began unearthing one of the P-38s trapped under 250 feet of ice.

The P-38 was successfully excavated from its frozen tomb and transported to Middlesboro, Kentucky where a restoration crew spent 10 years bring it back to flying condition. The plane was dubbed “Glacier Girl” in honor of her frozen tomb. When Glacier Girl was restored to flying condition they tracked down one of the squadron’s pilots 89-year-old Brad McManus and took him on a fly along tribute flight to England.