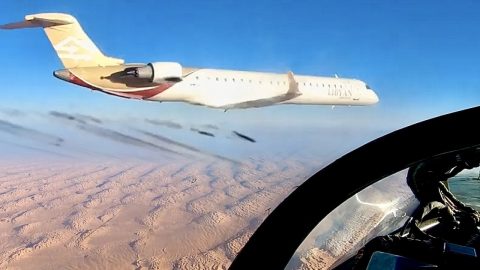 This unidentified fighter jet intercepted a Mitsubishi CRJ passenger plane over the Sahara desert. The encounter was part of an exercise to train fighter pilots on how to intercept an aircraft. After the two made contact, the passenger plane was escorted for a safe landing on the nearest air base.

Intercepts are usually done when an aircraft loses contact with the ATC. The interceptor would generally ask if the crew is still running “in normal operations,” meaning no hijacking or engine failures. If not, the usual reasons are a failed handover, missing repeated calls from the ATC, and radio failure.

What did you think about the pilot’s performance? Most importantly, do you think he should clean the canopy? That’s the only thing the YouTube comments were talking about!