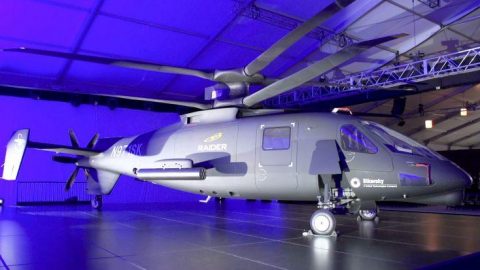 Batmobile Of The Skies.

Helicopters aren’t given much thought when compared to fighter jets due to lower speed and agility. But every once in a while technology takes a leap forward and changes our opinion. The debut of Sikorsky S-97 Raider is a big game-changer for the world of attack helicopters. The S-97 is boasting speed and agility far beyond other helicopters.

In development, the S-97 is boasting flying speed of 276 mph far making it the second fastest helicopter ever made after the experimental Eurocopter X3. The Raider is capable of transporting six passengers alongside two pilots but is also capable of autonomous flight. Along with its impressive speed, it can fly to an incredible height of over 10,000 feet.

“In addition to flying at nearly twice the speed of a conventional helicopter, the S-97 RAIDER helicopter will incorporate other key performance parameters critical to combat operations — increased maneuverability, greater endurance, and the ability to operate at high altitudes.”

As prototypes improve the S-97 will undergo weapon testing for its .50 caliber and rocket pods. The Raider is a sleek, impressive and but could be the innovation the military needs for helicopters? Take a look at this clip and judge for yourself.