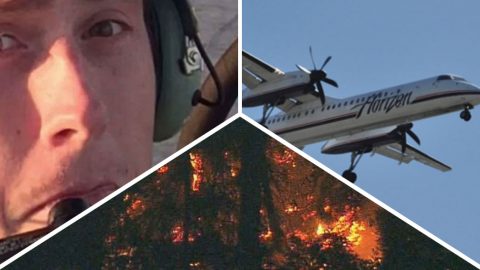 On August 10th, 2018, an airport worker at the Seattle-Tacoma International Airport stole a Horizon Air plane. Richard Russell, 29, responsible for directing aircraft and handling baggage, was able to tow a 76-seat Bombardier Q400 out of a maintenance bay, fire it up and take it for a one hour joyride.

At the end of pulling stunts such as loops and rolls, the aircraft ended up crashing into a thickly wooded island with no one injured on the ground.

Within minutes of the ATC finding out a plane took off that was not scheduled, two F-15 Eagles were summoned from an Air Force Base in Oregon. As you’ll hear in the footage below, they talked to Russell in a calm manner making sure he wasn’t going to crash into populated areas.

After the crash, the military clearly stated they were not the ones who took down the aircraft. While going through the numerous videos available of the incident, it seemed the aircraft was crashed on purpose or due to insufficient flying skills.

Although a thorough investigation is underway, it seems clear the entire fiasco was orchestrated by a suicidal man. As a lot of the ATC audio is available, Russell is heard saying, “I’m just a broken guy, got a few screws loose,” and “I wasn’t really planning on landing,” all indications this was a one-way mission for him.

Response Of Family And Friends

Russell was described by his family and friends as a caring and faithful husband, a great son and as a funny guy overall, which oddly comes across in the ATC audio gathered by authorities. When spoken to, everyone who knew Russell said this incident came as a massive shock as they’d never think he would do something like this, let alone being suicidal.

At one point during transmission Russell said, “I got a lot of people that care about me and it’s going to disappoint them to hear that I did this. I would like to apologize to each and every one of them.”