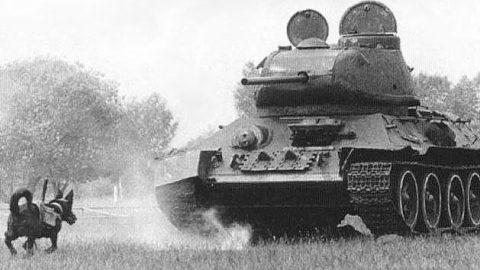 Today I Found Out

During World War II, there are many different weapons used in conflicts, some standard, some innovative and some just plain weird. Desperate times call for desperate measures and these times called some of the more “creative” weapons of war. As Nazi Germany began their invasion of the Soviet Union the Russians turned to a twisted method of stopping their tanks.

This brings us to the Anti-Tank dog which was developed but the Soviet Union as their conflict with Nazi Germany escalated. The Soviets knew they would need every man they could to fight off the invading Germans, so they looked for means to defend other than manpower. It sounded odd but they went with dogs.

If you are a dog lover you may want to stop reading right now. Using Pavlovian Conditioning the dogs were trained to run under tanks while wearing vests strapped with explosives. This technique proved to be effective in the training process since dogs were easy to condition to run under thanks, but it didn’t go as planned.

In the conditioning process, the dogs were trained to run under tanks in order to detonate the bombs. However, on the battlefield, the dogs didn’t know they were supposed to run under German tanks. Instead, they ran under Soviet Tanks and detonated their bombs because it was all they knew.

Using dogs as weapons backfired spectacularly for the Soviet Union and it serves them right for using innocent dogs as weapons. This clip from the History Channel explores the topic of Anti-tank dogs in WWII.