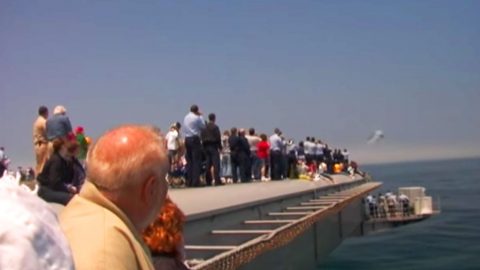 Before anyone starts saying that display pilots are now allowed to break the speed of sound during airshows and whatnot, let us stop you right there. This video was not taken at an airshow and it was also shot over a decade ago. Rules were way different and aviators were allowed to do this.

This part’s not in the video, but right before the flyby the announcer said, “Black Lions, fighter squadron two thirteen (213), flown by Lieutenants Jeff McKenna and Ben Henemyer(?) will make a super-sonic pass from stern to bow. After the pass Lieutenant McKenna will execute a maximum G pull into the vertical while dispensing flares.

This flyby occurred back in 2008. About 50 miles off the coast of Norfolk, Virginia, an F-14 Tomcat pilot was showing off in front of the crew and their family members during a “day cruise.” The ship they were on was the USS Teddy Roosevelt which is a Nimitz-class aircraft carrier. The navy often does this shows to boost morale aboard the ship by letting the crew invite their families and the pilots do the rest.

As you can see in the video, it’s quite a thing to witnesses.