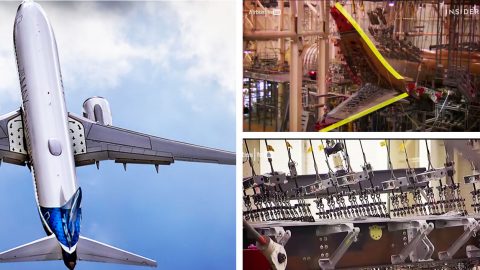 To the average flier, most of the physics and mechanics of how an aircraft actually works is a complete mystery. “Something to do with wings, speed and that thing called lift,” is pretty much the understanding of most travelers.

That’s O.K. of course, as they’re not pilots or engineers. You don’t know all the mechanics of a car yet you drive and that analogy could be extrapolated to many things. This doesn’t mean certain things can’t freak you out simply because you don’t understand them.

After talking to a few people, we realized the gentle wobbling of the wings while the aircraft is airborne sometimes makes people uncomfortable. It’s reasonable to assume people would think the wings should be sturdy, but that couldn’t be further from the truth.

Just think about this. A sturdy surface with no flex put in front of a 500 mph wind would shatter and break. It’s the “give” that allows things to stand up to such forces.

The same rule is applied to tall buildings for example. On a windy day (although unnoticeable at times), you can feel a slight sway of the building. This is because they’re built on the same philosophy that the flex will work against the wind to build resistance and return it to its original position.

Now, when it comes to wind, think about turbulence. Let’s just say for the sake of argument some bad weather causes the aircraft to drop some 30 feet in mere seconds. With completely sturdy wings, the whole thing would shatter and break apart mid-air.

Since the wings are flexible, they’re able to “give” when facing those forces and the aircraft stays intact. What most people truly don’t know, is that wings are built to withstand a lot more force than you’d think, and the video below proves it.

While testing their aircraft, Airbus engineers flexed the wings of their new design and filmed it which you can see below. There’s more than 20 feet of displacement between the angle of the resting wing and that of it being flexed, so next time you’re flying and see more than the usual wobble, pay no mind to it. These things are designed to withstand much more.