This WWII Veteran Just Broke A World Record He Set Himself 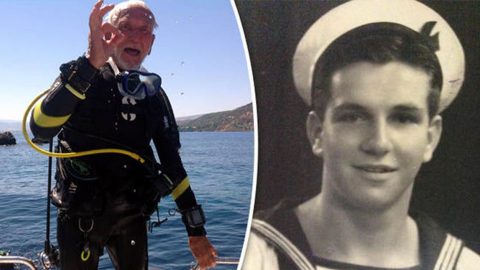 We all know World War II veterans are known as the “Greatest Generation” as they selflessly entered the worst war the world has ever seen to protect our freedoms. Although it happened over 70 years ago, the folks from that era are still an astounding testament to that namesake.

“I am trying to prove to myself, and I hope to other people, that exercise, especially when you are getting to around my age, is most important to do.” | Ray Woolley

Meet Ray Woolley, a radio operator during World War II. After the war, he moved to Cyprus where he became an avid scuba diver and has been doing it ever since. So much so in fact, that last year he became the oldest person to scuba dive at a depth of 38.1 meters for 41 minutes. He was 94 when he did that.

That was apparently not enough for him. This year, in 2018, at the tender age of 95, he dove to see a shipwreck of Zenobia which sank on its maiden voyage in 1980. For this dive, he went down to 40.6 meters for 44 minutes, beating the previous world record for oldest scuba diver at that depth and length of time.

Needless to say, the Greatest Generation still seems to remain the greatest.