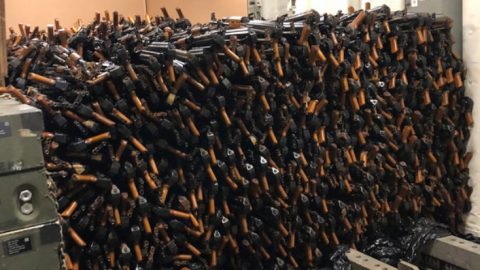 The USS Jason Dunham has been performing routine anti-terrorism patrols around the Persian Gulf and encountered quite the discovery. Last August the Arleigh Burke-class destroyed seized over 2,500 AK-47s from weapon smugglers on their way to Yemen. Now inspectors from the United Nations are examining the massive cache of weapons to determine their origin.

This all began when USS Jason Dunham spotted two vessels 70 miles off the coast of Yemen exchanging multiple duffel bags which is always suspicious. The destroyer moved in to investigate and intercepted a major weapon smuggling operation. The point of origin is suspected to be Somalia but a deeper look by authorities is required.

“It’s one big traffic corridor. It’s not blocked, and it’s not just lines on a map that people don’t penetrate.”

Terrorism remains a prevalent threat to the Middle East and weapon smuggling is still feeding the beast. This is a small step towards achieving peace in the areas, but thanks to the efforts of the US Navy countless lives have been saved.