No, That’s Not A Truck Being Launched In The Ocean 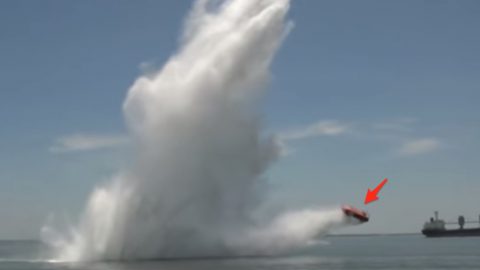 The USS Ford has proven to be problematic and expensive, most notably because its new EMALS (elecromagnetic aircraft launch system) has had a lot of issues.

But they seem to be working well and dandy in this video of it launching dead weight sleds into the James River. The sleds, which weigh a mind-boggling 80,000 lbs., look like trucks straight out of an action movie. Even better, they don’t just plop right in the river – the force is so powerful that they ricochet right off the surface like someone was skipping stones. It’s wildly entertaining to watch.

It looks like it was probably a good day at work for the crew as well. You can tell they had fun. Just a little bit.

Wait, The Navy Is Launching Trucks In The Ocean?

Naturally, as entertaining as this video is, it’s been making the internet rounds accompanied by quite a lot of misinformation. Internet complainers have lipped off about wasted money and environmental impact, while others have had some very entertaining responses. Here are a few of the funniest found on Twitter:

Kinda reminds me of my divorce

Just to clarify, the video isn’t new (it’s from 2015, but it’s definitely timeless), those aren’t trucks, and the military isn’t being wasteful. The James River is shallow enough that the heavy sleds are (and were) easily retrieved.