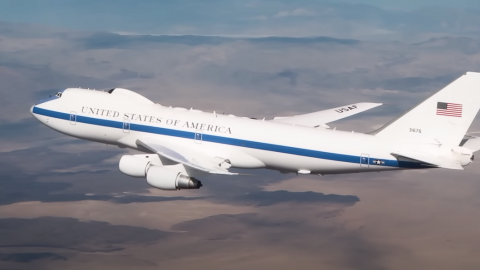 In the event of a nuclear attack, important figures such as the US President and the Secretary of Defense can opt to fly aboard the Boeing E-4B. The project started in the early 1970s, at the height of the Cold War when threats of nuclear strikes were far too common.

The E-4B is a strategic command and control military aircraft designed to survive such attacks. It houses a crew of 112 people and can fly for more than 150 hours straight with the help of tankers for aerial refueling.

Additionally, the 231ft long aircraft has multiple decks for various purposes. There are dedicated areas for food preparation, water storage, and communications. While aboard the plane, officials can talk to military leaders to facilitate troop movements.

Despite its advanced technological features, the E-4B still uses analog instruments since it offers better survivability against EMP blasts. Aside from protecting against EMPs, the E-4B is also shielded from nuclear and thermal effects.

Not bad for America’s “Doomsday Plane”!