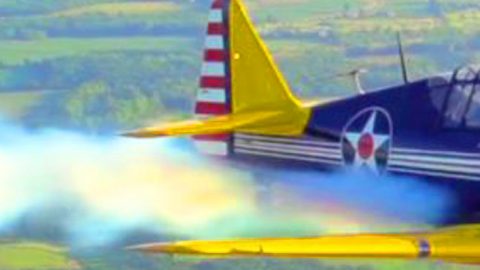 The North American P-64 is a warbird that you don’t see often, in fact, you wouldn’t even see many during WWII. At first glance, many might mistake it for North American Texan, but this is actually a fighter.

Only 13 North American P-64s were produced, seven of them were sent to the Peruvian Air Force while the other six were being sent to Thailand. The ones on route to Thailand were actually in Pearl Harbor when it came under attack by the Japanese Navy.

“This actual airplane amazingly was in Pearl Harbor on December 7th, 1941. It was on its way to Thailand as part of an order of six that went to the Royal Thai Airforce. When it looked like Japan was going to overrun Southeast Asia they recalled those airplanes and they happened to be on a ship in Pearl Harbor on December 7th, which is one reason it was a good year to bring it back out to show all our fellow EAAers this year this iconic airplane.”

Now the last flyable P-64 sits proudly in the Eagle Hangar of the EAA AirVenture Museum. Every once in a while they dust off this beautiful plane and show what it can do. The folks from the EAA brought it out for some flybys at sundown recorded in this video and she’s never looked better.