WWII Planes Weren’t All That Well-Armored 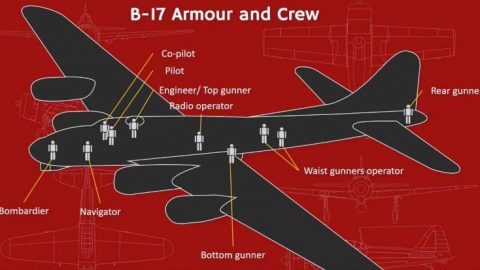 When it comes to the planes of the Second World War there is a wide variety of who can dish it out and who can take it. You hear about the flimsy paper-thin A6M Zero and the nearly invincible bulk of the B-17 Flying Fortress. However, there are some misconceptions about how durable certain WWII planes are and that they are not as well-armored as one might think.

Equipping planes with armor sounds like a great idea at first, but there are many drawbacks to such defenses. The downside of armoring a plane is that defensive materials are often very heavy which will lower the speed and performance of the plane. Instead, planes used self-sealing fuel tanks as a means of keeping their weight low and providing a means of survival if the plane was shot.

The P-47 Thunderbolt has a reputation for being one of the most rugged and durable planes of the war, but that’s not the case. If you examine the chart above you will find that the P-47’s armor is actually thinner than that of the so-called flimsy Nakajima Ki-43.

The B-17 Flying Fortress despite its reputation also has a very misleading title. The Flying Fortress earned its name for its massive array of weapons, but not for its defensive features. The giant bomber has some armor but was thickest near where the pilot was stationed, since he was the most valuable member of the crew.

To learn more about how warbird armor actually functions check out this very informative video from Bismarck.