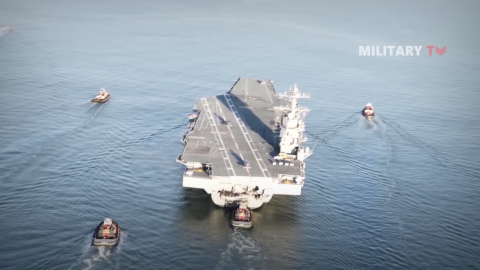 Women make up about 20% of the Navy, meaning urinals can’t be the go-to anymore. Now, urinals are removed and replaced with more seated toilets.

USS Ford’s total length is  333m with a flight deck width of 78m. This massive carrier displaces around 100,000 long tons!

Compared to the Nimitz-class, USS Ford saves more than $4 Billion in its 50-year service life.

Official statements say it could carry more than 75 aircraft but some sources said it’s up to 90.

It uses 4 propellers made of bronze, each weighing 30 tons and 21 ft in diameter.

It has two Bechtel A1B nuclear reactors to generate the heat needed to power everything on the ship.

The ship’s top speed is 35 mph. It is slower than the USS Enterprise but it is way bigger and has higher displacement.