The Deadliest Weapons On US Navy Ships Right Now 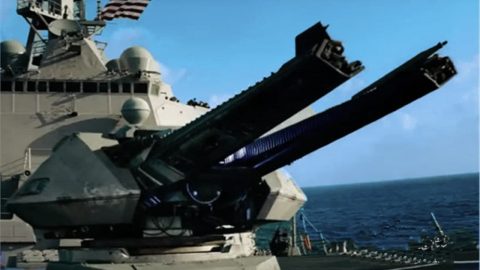 A Ton Of Weaponry

The number and quality of weapons that the US Navy currently have make it the strongest Navy in the world.

Mark 38s based on the M242 Bushmaster has a 25mm automatic gun that allows it to fire nonstop and its short barrel makes it easier to install. Phalanx CIWS anti-aircraft guns are used by warships to counter anti-ship missiles as well. It’s so good at its job that a ground version called the LPWS is used for testing as part of the C-RAM systems.

Railguns can launch projectiles up to 112 miles – and that’s just the beginning. The Navy aims to increase that range to 250 years from now. Highly accurate UGM-133A Tridents used in Ohio-class submarines makeup 52% of the US strategic nuclear force and can cover 7,000 miles. To top it off, a Laser Weapon System developed by Kratos Defense can destroy drones and small vessels.

These weapons aren’t even half of what they have in their arsenal. Take a look at this list compiled by Wild Iron in the video below to see how impressive these weapon systems can be.