10 Facts about the “Seaplane That Could Fly Forever” 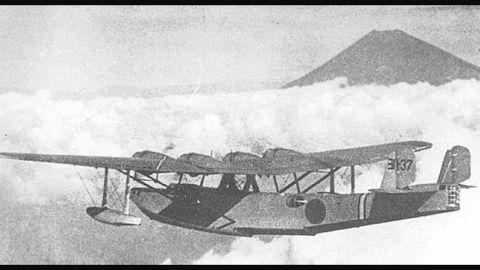 In the early 1930s, a Kawanishi team visited the Short Brothers factory in the UK. There, they gained extensive knowledge at one of the world’s leading producers of flying boats. The trip quickly paid off when the Kawanishi H6K was introduced in 1938. Here are ten facts about this massive long-range flying boat:

When the Japanese Navy’s Experimental 8-Shi Large Flying Boat Specification failed in 1933, it gave way to a new 9-Shi specification the following year. The new one asked for a monoplane flying boat with four engines that can cruise at 120kts with a range of 2,500nmi – paving the way for the Kawanishi H6K.

2. Largest ever at one point

H6Ks had a wingspan of 131.23ft mounted above the hull and supported by V-shaped struts in a formation. In addition, it measured 84.1ft in length with a maximum takeoff weight of almost 50,000lbs.

The Mavis underwent many engine changes during its short history in service. Initially, the aircraft was powered by four 840hp Nakajima Hikari 2 engines, but its lackluster performance during its maiden flight forced it to be changed to four 1000hp Mitsubishi Kinsei 43. Later, the H6K would be fitted with the 1070hp Kinsei 46.

At that time, the Japanese flying boat proved its combat effectiveness through its exceptional range and endurance. Furthermore, it had great navigation qualities and offered good stability in air and water.

One of the many drawbacks of earlier variants was its slow cruise speed of 130mph and lack of defensive armament. However, the H6K4 variant introduced in 1939 addressed these shortcomings. Most notably, the aircraft eventually had a 20mm Type 99 machine gun in the tail turret.

7. Participated in the Pearl Harbor attack

During the infamous Pearl Harbor bombings, 66 H6Ks were on the frontlines of the Japanese Navy. This was mainly because the Mavis was the only viable reconnaissance flying boat with long-range capabilities at the time of the attack.

The H6K had an impressive maximum service range of 4,210 miles and a ceiling of 31,496ft. What’s even more impressive is that it can last for 26 hours and 54 minutes in the air. Because of this, 24-hour recon missions were frequently done by its 9-man crew.

Like other Japanese aircraft at the time, the H6K was unarmored and lacked self-sealing fuel tanks. For defense, its four 7.7mm machine guns proved to be inadequate, unlike its 20mm in the tail. In addition, the US discovered that it had no defenses in the 3 and 9 o’clock bearings, which they abused.

10. Dabbled in other roles

Aside from being used as scouts, the Mavis also had a brief stint as a bomber, carrying two 1,764lb torpedoes or 2,205lbs of bombs. The flying boat ultimately became a transport aircraft when the far-superior H8K Emily replaced it in 1942. The transport version had no armaments, an increased fuel capacity, and two cabins, which pushed the maximum limit of passengers to 18.