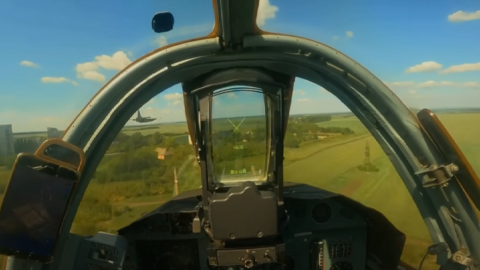 Flying too high or too low both have their advantages and disadvantages. But why do Ukrainian and Russian pilots tend to stick close to the ground during their sorties? Here are five reasons why they do this:

Most radars used today operate like flashlights. This means that the target wouldn’t receive the electromagnetic wave from the radar if something were on the way. The radar antenna’s elevation and the target aircraft’s altitude can both affect its detection range.

Huge bodies of land or tall infrastructure can physically mask the aircraft from radars. Back in April, the Ukrainian Air Force utilized this to their advantage when they resupplied and evacuated soldiers from Azovstal in Mariupol.

Enough presence of rain, smoke, clouds, birds, or water vapor can scatter or absorb electromagnetic transmission from radars. This is further complicated the farther the target is since more clutter is observed.

Trees, buildings, power lines, or other ground objects might also reflect a radar signal. To take advantage of this phenomenon, aircraft pilots would do “nap-of-the-earth” flights where helicopters are flown 10 feet off the ground and jets 50 feet.

Even though a radar signal bounces off an aircraft, the returning signal might reach the receiving antenna from two or more paths. This is because signals can bounce off the ground, bodies of water, or other objects on their way back. When the same signal is received over more than one path, it creates a ghost target that appears the same way as an actual target.