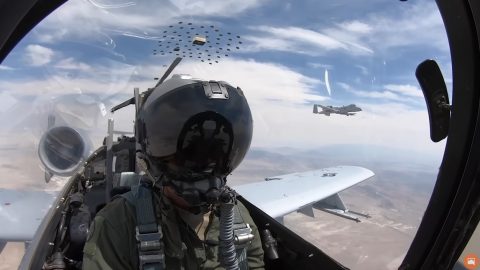 The A-10 heavily benefits from uncontested airspaces. Its great performance in the wars before was mostly due to the fact that the enemies didn’t have a considerably strong air force. The Warthog is also considered slow by today’s standard which makes it susceptible to AA missiles.

Everyone knows about the capabilities of the GAU-8 Avenger. In fact, it’s what everybody knows about the Warthog. Unfortunately, the Avenger isn’t as effective as you’d think. The armor used by the T-72s is just enough to render the 30mm bullets slightly ineffective.

When faced with the Russian T-72s, the A-10 could find it hard to take them down. In theory, Warthogs would need to aim at the sides or at the back of these tanks to be more effective. These tanks have new laminated armor that is 205 mm thick. Due to its slanted design, it gives about 500 to 600 mm of thickness.

According to the Rand Corporation, the A-10’s tactics would place it at a higher risk of being shot down against high-quality air defenses. Russian fighter planes and air defense systems are still a big part of the war so an A-10 would find it difficult to survive in these conditions.

Ukraine’s (and Russia’s) Su-25s provide the close air support their troops need. It has a 30mm GSh-30-2 autocannon with 250 rounds and gun pods for two 23 mm GSh-23 autocannons with 260 rounds. Yes, it doesn’t have the same firepower as the A-10 but it has proven to be capable to do its job while having faster maximum speeds.