A Black Hawk Dropped An Ammo Box Through A Texas School 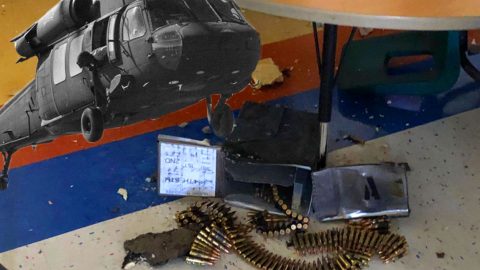 As If Schools Don’t Have Enough To Worry About.

On May 17th, 2018, a UH-60 Black Hawk helicopter was conducting routine exercises in El Paso Texas when someone onboard made a very, very big mistake. We don’t know how it could have happened, but that unlucky person let a box of ammunition fall out of the helicopter. Yes, we’re talking about a metal box full of bullets plummeting from the sky, hitting a school.

Luckily, the incident occurred at 3:45 PM, meaning, the students of Parkland Elementary School were out for the day. We wouldn’t even want to speculate what the alternative would have been if it happened just an hour earlier.

This box of ammo fell from a military helicopter, crashed through a roof, and landed in the middle of a classroom at Parkland Elementary in El Paso, TX, according to Ysleta ISD.

Fortunately, the incident happened at 3:45pm local – when all the kids had left. No injuries. pic.twitter.com/2ID4a4HdRL

As for the damage, you can see it clearly in the Tweet above posted by an NBC journalist. The ammo box punched a massive hole in the roof of the school and landed by a desk. According to people at the scene, it also knocked out power to the building.

The 1st Armored Division Combat Aviation Brigade of the Army released a statement saying they were “sorry for the damage and grateful no one was hurt.”

No word on how this actually came to be, however, and who is responsible.