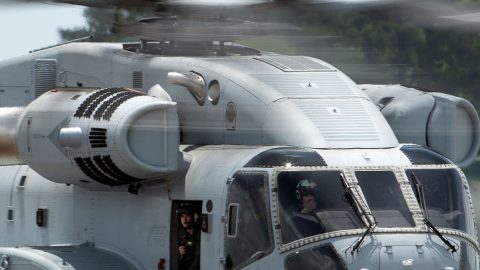 Three Times More Powerful Than Anything Else.

Sikorsky’s CH-53 line of helicopters has served the United States military since the mid-’60s. Designed for heavy lift and transport, its various versions are used not only by the U.S. but also Germany, Mexico, and Israel, with Japan now interested in purchasing the new one.

Its latest version, the CH-53E Super Stallion, has served since 1981 but with advancing technologies and the need to transport more modern equipment to battlefields, the Marine Corps needed something new, especially because the current airframes were expected to hit their expected life limit around 2012.

In 2006, Sikorsky gave the Marine Corps a proposal outlining a new version of the CH-53, namely, the CH-53K King Stallion, as opposed to retrofitting the existing fleet. The Marine Corps agreed and Sikorsky unveiled their new design almost a decade later.

Here are some of the most notable differences between the CH-53E and K:

The Marine Corps is expecting to get 227 of these helicopters at a cost of $131 million per unit including R&D costs.

You can find a quick and educational overview video below. It’ll show you the helicopter in action as well as some statistics not mentioned in the article.