Why Did WWII-Era Jeeps Have Iron Poles? 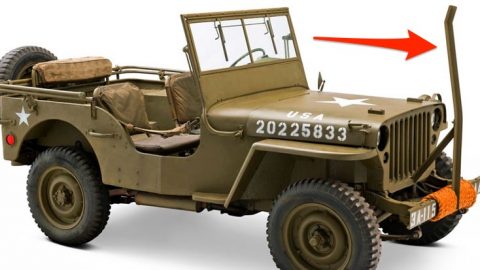 The Jeep has long been a staple of military transport and reconnaissance dating back to World War II. This military utility vehicle has undergone many transformations, evolutions, and adaptations over the years some of them useful and some not so useful. Iron poles in the front of Jeeps were an odd modification but they had a function.

Jeeps were the go-to reconnaissance vehicles of the United States Army but they were not without their weaknesses. The Jeep’s windshield while providing some defense from the elements were also a vulnerability. The glare from the glass was very noticeable by German snipers who exploited their position for easier targeting. As a result, windshields were often removed from the Jeeps to reduce their visibility.

However, the Jeep’s lack of a windshield was soon exploited by German soldiers. They would tie strong wire between trees at neck height between trees and this could often result in an injury or decapitation of anyone driving by. To counter this deadly trap, Jeeps were equipped with poles welded to the front which were strong enough to break the wires.

Simple History shows an interesting look at the Jeep’s iron poles and how they were utilized during WWII.