After Delays, The Army’s New SB-1 Defiant Helicopter Just Made Its First Flight 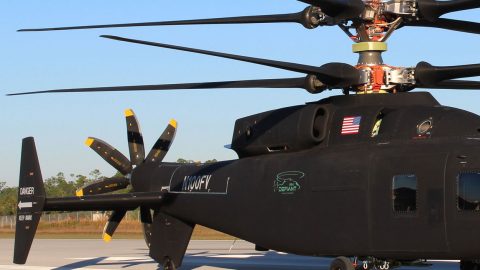 On March 21st, 2019, the prototype of a joint development between Sikorsky Aircraft (a Lockheed Martin Company) and Boeing made its first flight at the Sikorsky West Palm Beach site in Florida. The aircraft named SB-1 Defiant passed all the initial tests the company set for it and is now set up for future development.

VIDEO: Our #SB1 Defiant aircraft has officially completed its first flight! ? We're excited to advance the next generation of @USArmy helicopters with our X2 Technology and @BoeingDefense partnership. https://t.co/BgYOTO3fWM #FVL pic.twitter.com/JdxOUSb3Sk

The flight was originally scheduled for 2017, but additional requirements by the Army and new equipment testing pushed it to 2018, and then again to March of 2019. The aircraft prototype itself was only unveiled in December 2018.

This prototype stems from the Army’s request for a new Joint Multi-Role helicopter its been wanting since 2004. Having spent almost 2 decades fighting the war on terror in the Middle East, Army higher-ups recognized a need for new insertion methods and platforms that can be cross-functional.

As the UH-60 Black Hawks, AH-64 Apaches, CH-47 Chinooks and OH-58 Kiowas are aging, the Army is considering possibly having one platform which shares the same avionics and other technologies to cut on the overall cost of maintenance. This is the same strategy the Air Force Navy and Marine Corps are implementing with the F-35 Lightning II.

Although many defense contractors entered in the bidding, the two finalists at this point are the Defiant and Bell and Lockheed  V-280 Valor pictured above.  After more testing is done, the Army will be ready to award a full-scale contract to the design they find most efficient.