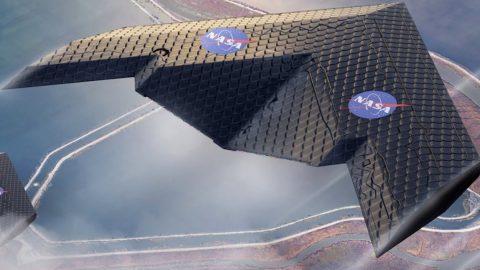 The Elliptical wing of the Supermarine Spitfire. The inverted gull wing of the Vought F4U Corsair. Innovative and exciting, the wings of WWII were on the fast-track in both science and trial and error. They shaped the future of aviation.
But all of that is about to take a sharp turn. What’s next for wings is a completely different animal.
And we mean that pretty close to literally because now there’s a wing that works much like an animal’s wing does – it’s flexible, and it morphs as it flies.

“…a condor will lock its joints in while it’s cruising, and then it (adjusts) its wing to a more optimal shape for its cruising, and then when it wants to do a more aggressive maneuver it’ll unlock its shoulder. That’s a similar response to what we’re doing here.”-Mick Cramer, NASA Research Engineer

NASA Is Leading The Way with MADCAT

That’s right, NASA and MIT are working on a new wing unlike anything we have ever seen before. It’s called MADCAT- Mission Adaptive Digital Composite Aerostructures Technology. It’s 14 feet wide and constructed of thousands of units of polythylene resin which lock together. At this stage it’s being made by hand with the help of a 3D mold. Eventually it could be assembled by robots.

Flight conditions sometimes change while you’re up in the air. The solution? MADCAT! @NASAAmes is creating MADCAT plane wings that can adapt for any flight. Sensors take in real-time data, & algorithms rearrange blocks into the optimal shape. Take a dive: https://t.co/AgWcSmO2Q1 pic.twitter.com/Ge3FjTtiJx

But what about actually using the wing? It’s so different than what we have right now that the key would be figuring out how to make a smooth transition. And that’s all about research, time, and of course, money.

“The more modular you can make a system in terms of the manufacturing, the more likely it is you can get to the point you can swap out parts so efficiently that you can keep the aircraft in service, even through to the point where you’ve replaced every component on the aircraft. This is something that has been done with boats.” – Kenneth Cheung, NASA research scientist