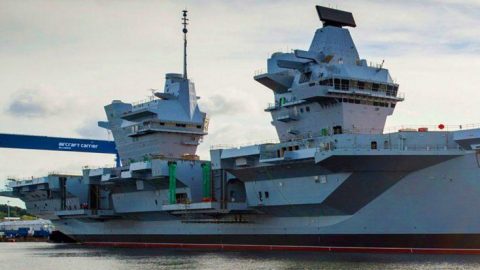 It has been called the jewel in the crown of the Royal Navy, the future of Great Britain’s maritime defense. The biggest warship that the United Kingdom has ever made is about to make her debut, the HMS Queen Elizabeth.

The first of her kind, the Queen Elizabeth-class aircraft carrier is nearing completion and preparing for sea trials. She was launched in 2014 but has undergone fine-tuning to ensure that her highly advanced systems work correctly for the 50 years she is expected to serve. The massive carrier is not equipped catapults or arrestor wires and will operate solely using VTOL aircraft such as the F-35 as well as Merlin helicopters.

The HMS Queen Elizabeth comes with a price tag nearly $4 billion and will carry around 36 F-35 Lightning II jets once completed. The carrier is designed by BAE Systems is 960 feet long and can house up to 1,600 onboard personnel. Currently, crews are putting the finishing touches to a refine the surface of the ship to preserve its longevity and safety for pilots.

The carrier will enter sea trials this summer after years of construction. Check out some behind the scenes action of the HMS Queen Elizabeth in this clip from BAE Systems.