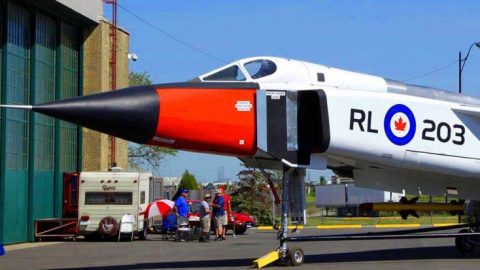 The story of the Avro Arrow is an intriguing one with many twists and turns along the way. It was easily the most advanced fighter jet on earth when it was introduced in the 1950s but it never got a chance. The program was discontinued right before the Arrow was scheduled for a launch and the completed units were pushed into Lake Ontario in order to prevent the technology from falling into the hands of rivals.

After the announcement that Avro would be discontinuing the Arrow all of the units were destroyed. Now that Canada’s 150th Anniversary is approaching a group called OEX is leading an initiative to recover these planes from the bottom of Lake Ontario and restore them in order to celebrate their crowning achievement of aviation.

“We all have the same goal in mind: to find and return these beautiful pieces of Canadian technology to the public eye during this anniversary year of our incredible country.”

This comes as a shock because there are many who believe that canceling the Avro Arrow set back the world of aviation by several years. Ottawa’s Canadian Aviation and Space Museum will oversee the restoration of these discarded Arrows but a launch date has not been set to begin the search. The bigger issue is locating these and if it is actually possible to restore them from their deteriorated state. Where do you stand on this issue, should they seek out these long lost jets or is it a wasted effort?