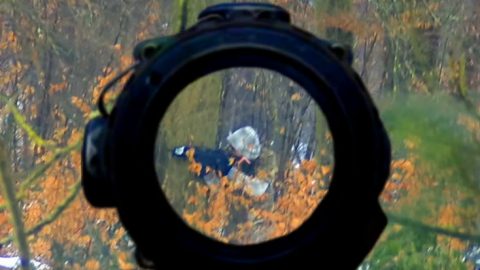 For those longing for the thrill of a shootout without the risks of being shot they can always turn to airsoft competitions. Fans gather their airsoft guns, protective gear, form teams and engage in fun simulated combat. Some of these airsoft teams are quite skilled at head to head shootouts, but sometimes they bite off a little more than they can chew.

An airsoft team thought they would make things interesting by adding a bigger challenge. They invited an officer from a SWAT Team to challenge them in a round of their combat simulation. Going up against a well-trained officer who has plenty of experience in threatening situations is a great way to shake things up in an airsoft game. But even the best airsoft players know when they get a little in over their heads.

The airsoft team starts by getting a lay of the land featuring an abandoned building in the middle of a snowy forest. The whole area looks like a scene out of a James Bond film so it is quite appropriate for a shootout. Then the games begin and very quickly the airsoft team realizes that they are in for a world of hurt as you can see in this video from Silo Entertainment.