After Reinforcing This Prius, These Guys Shoot An M61 Gatling Gun Mounted On It 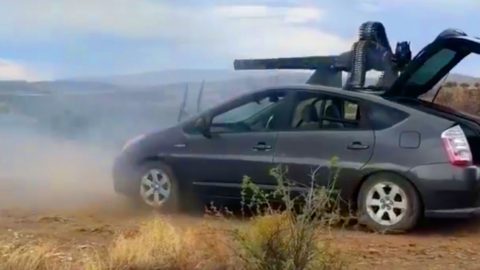 Once you see these videos we’ll pretty sure you can then say, “yup, now I’ve seen it all.” A group of veterans decided to make their Prius a bit more efficient and did so by mounting an M61 on its roof. Not sure what the original purpose was, but we guess it’ll help with gas mileage because the roads in front of them will clear out at the sight of it.

The masterminds behind the Facebook page Black Rifle Coffee Company somehow got their hands on an M61 strapped it to a Prius. When asked, “why,” they responded with, “because Raptors are too expansive.” Touche.

According to their video, the project took more than 160 hours of labor as the entire interior needed to be gutted and have a roll cage installed. We’re guessing it was needed to take corners because the Prius became extremely top heavy.  The Vulcan alone weighs over 200 lbs., but with the feed system it comes up to almost 500 lbs.

Either way, watching this thing get blown back when the gun is fired is beyond epic. Check it out.

Mount a Cannon to a Prius!!??… Sure. We can Do That~BRCC Presents: The Prius Vulcan