Our Newest LM-100J Shows Off Its Latest Sharp Turn Landing 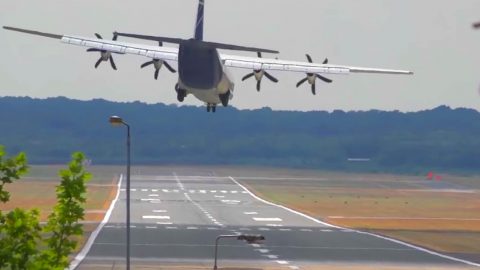 Our fleet of C-130 Hercules aircraft is a longstanding one. One of the most versatile cargo planes ever built, they’ve been serving in our military since 1954. To date, there were over 2, 500 of them produced for both military and civilian purposes ranging from simple transport to being a gunship supporting troops on the ground.

The newest variant to enter service is the LM-100J, a derivative of the C-130J Super Hercules. This platform is meant to be a commercial freighter and is now in production. It’s still quite new, however, which is why its capabilities (such as maneuverability which you’ll see in the video below) are now shown during certain airshows.

To show off what a big transport/cargo aircraft like that can do, a pilot recently performed a sharp turn landing during an airshow. As you’ll see, the LM-100J came in hot and banked sharply before coming to a really short stop. For an aircraft that weighs over 70,000 pounds empty, that’s quite a feat.