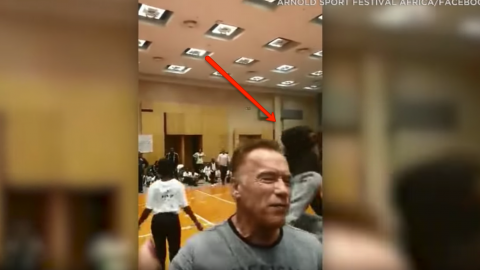 He Probably Won’t Be Back

Probably one of the last things you want to do, is freaking drop-kick Arnold Schwarzenegger while at an event. The former Mr. Olympia and Hollywood legend, not to mention former governor, was talking to a group of dudes at an even in South Africa when suddenly someone rushed him, and WWE drop kicked him in the back. The actor stumbled just a tad, being 6’2” and 250+lbs of muscle. Immediately you see his body guards grab the idiot and escort him out. Dude was a lot smaller than the body guards, and is probably regretting his decision now. People will do anything to get attention nowadays!