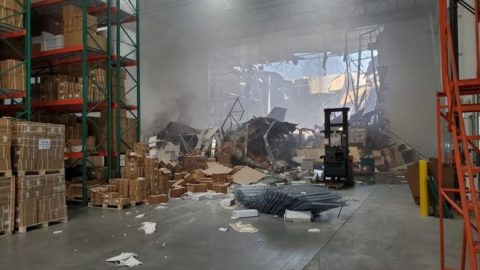 Last Thursday, an F-16 jet crashed into a warehouse because of hydraulics failure. It was supposed to return to the March Air Reserve Base in Riverside County after conducting a routine training mission.

Fortunately, no one was killed in the incident, but 13 people were reported to have been slightly injured. Just before the crash, the pilot was able to eject and parachute his way into safety at the Reserve Base.  He is presently in good condition.

The 500,000 square-foot warehouse was operated by See Water, Inc. – a company that manufactures pump control and treatment products. Mike Johnson, the company’s CEO, said in a press release that all the employees inside the building were safe.

The military is investigating the crash of a fighter jet into a Southern California warehouse. Slow motion dashcam video captured the F-16 as it slammed into the building in Riverside. The plane punctured the roof as workers were busy inside. @DavidBegnaud reports. pic.twitter.com/mEHw4j5sDJ

Many civilians on the ground were able to capture videos of the crash. One local was able to record the scene through his dash cam and remarked that “it looked like a bomb had gone off in the building.”

A recent development in the investigation revealed that the jet was carrying live ammunition which, according to the Air Force, could include a cannon with 500 rounds and several missiles. Col. Tom McNamara of the 452nd Air Mobility Wing at the Reserve Base said that the details on the actual armament it was carrying will not be disclosed for security reasons.

Statement from March Air Reserve Base on F-16 crash. 5 injured on the ground. pic.twitter.com/985Mhvridj

The fighter jet involved is part of the Air National Guard, specifically doing alert duties for the North American Aerospace Defense Command. This is the third aviation incident involving an F-16 fighter jet over the past seven months.