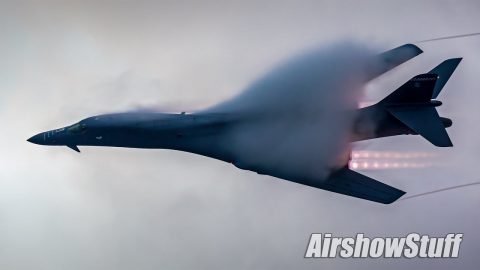 Whoever said it was a good idea to do these B-1 flybys at night deserves a raise. The afterburners look amazing with the dark blue skies. Who would have thought that orange hues can look good with that gloomy background?

Now, some might think those white fluffs on the aircraft are “sonic booms” or “clouds”. That phenomenon is actually called a vapor cone – or cape – however you visualize it. This is the result of humid air entering a low-pressure region, reducing the temperature, and resulting in condensation. Scientific facts aside, it absolutely ups the coolness factor of the B-1.

These EAA AirVenture airshows attract around 500,000 people every year and it’s easy to know why. Their airshows are filled with jaw-dropping stunts and beautiful aircraft.