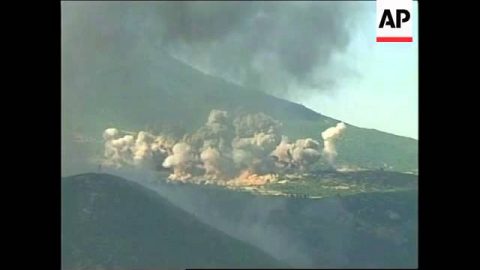 Just when you thought that the bombings were over, another area gets bombed. These bombings happened on June 6, 1999, near the Albanian-Yugoslav border. US B-52 bombers continued to bomb the weakened Serbians. The carpet bombings caused huge casualties among their troops.

The strikes were apparently aimed at the Serbians fighting the guerillas of the Kosovo Liberation Army. While earth-shaking bombs were raining down on their positions, the guerillas still pushed through. They fired their mortars and tried to stand their ground against Serbian artillery.

NATO’s bombing campaign lasted for almost 4 months. It involved 1,000 aircraft and over 38,000 combat missions. Most of the missiles used were Tomahawk cruise missiles from planes, ships, and submarines.

Using their endless supply of combat-ready machines, it only took a matter of time to sign the peace treaty.