B-17 Pilot Takes Aircraft Low To The Ground During Flyby 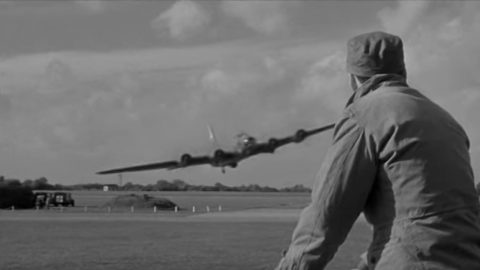 Get Your Fill Of The Flying Fortress Close To The Deck.

The B-17 Flying Fortress is one of the most beloved bombers of World War II, both by pilots and historical aviation enthusiasts. This is why this short clip is so amazing. It’s 30 seconds of our favorite bird performing several extremely low flybys. You really can’t get enough of it!

This footage is spliced together from the 1962 movie The War Lover and captures the best parts featuring the B-17. Starring Steve McQueen as Captain Buzz Rickson, the movie is loosely based on a 1959 novel by John Hersey of the same name.

To show his disagreement with his commanding officer, Buzz ‘buzzes’ the airfield to make his opinion known.

Without spoiling the movie, The War Lover is a story about a very capable pilot who breaks the rules to get the job done. A skilled leader, he and his co-pilot are trying to accomplish their 25 missions in order to rotate back home.

During their tour, they meet a young woman who falls for both of them, but soon realizes that Captain Rickson could be a borderline psychopath, which is warranted considering his behavior as a pilot. For the rest, you’ll have to see the movie or read the book if you haven’t already.