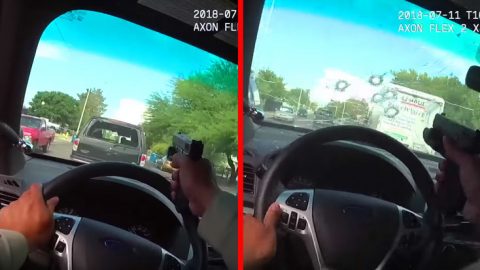 The streets of Las Vegas are usually a pretty exciting place, but they aren’t used to this kind of activity. A gunman tore through the streets after firing upon a police officer and a high-speed chase gave way. The situation became increasingly more dangerous as the gunman kept firing shots and the officer in pursuit took some pretty drastic actions.

This incident began when a black SUV linked to a crime was identified by an officer. He attempted to stop the vehicle, but the men inside fired shots and drove off at a high speed. Not exactly the smartest thing to do.

More and more police cars followed in pursuit of the black SUV but the officer who led the chase wasn’t giving up. However, as the gunmen kept firing innocent lives were put at risk. Unable to get a clear shot, he takes desperate move and fires through his own windshield to cripple their vehicle.

The incapacitated SUV crashes into a wall and the gunmen take off running. The whole scene is intense from start to finish. Newly released bodycam footage can be viewed in the link below, be warned it’s not for the squeamish or folks who can’t handle speed.