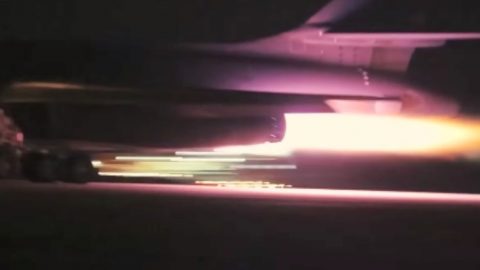 The B-1B Lancer has been a staple of the United States Air Force for over 30 years and shows no signs of slowing down. Few aircraft are capable of the performance that the B-1B has demonstrated and only grows in power.

The B-1B Lancer evolved from the original B-1 during the Reagan administration, despite fears that it would be vulnerable to Soviet anti-air weaponry. The B-1B has defied the odds and remains a major player in long-range bombing strikes and as of late taken on a role in anti-ship attacks.

“It provides combatant commanders out there across the world with a very key anti-ship capability in what we call the counter sea mission. So it’s designed to specifically to go against ships and it increases the B-1’s lethality and the range at which we can employ this.”

The B-1B never truly fulfilled its purpose as a nuclear bomber but has taken on so many other roles. It continues to contribute support to the US Air Force alongside the B-52, B-2 and will for the foreseeable future.

It is also quite impressive to see it launch into action with its four General Electric F101 engines. Check out this amazing video of B-1Bs taking off and lighting up the night.