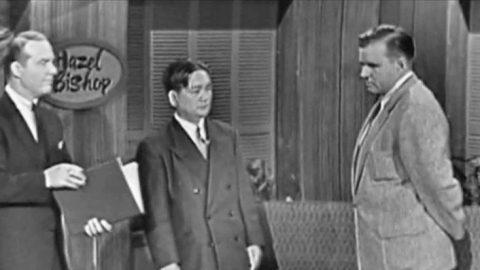 This Is Your Life?

The atomic bomb was a necessary evil used to put an end to World War II. It got the job done by helping to force a surrender from Imperial Japan, but 85% of people hit by the bomb were civilians. It was hardly a proud moment but there were still a dedicated few who worked hard to repair the damage done by the most destructive weapon in history.

Following the destruction of the atomic bomb, one of its survivors Reverend Kiyoshi Tanimoto set up a program to help some of its victims. Many of the survivors were severely disfigured by burns and thick scarring and Reverend Tanimoto brought some of these victims to America to surgeries. Over the course of a year and a half, these Hiroshima Maidens underwent skin grafts and other operations to restore their appearance closer to normal.

Reverend Tanimoto was hailed as a hero and made national headlines for his kindness. However, during one television appearance in 1955 on the TV show This Is Your Life things got a little out of hand.

As you can see the two guests are visibly uncomfortable with what is going on. It is a historic moment but there is a very uneasy tension between them as you can see in this clip.