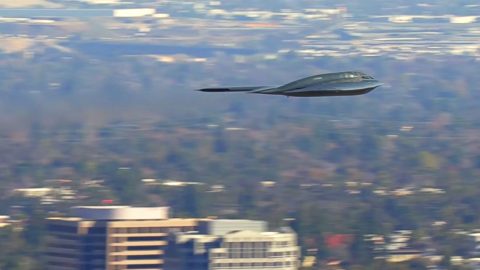 There’s nothing like a perfectly captured flyby of one of the rarest aircraft you can find in the air. We’re talking of course about the B-2 Spirit, the stealth nuclear bomber that ceases to amaze spectators since its first flight in 1989. These wonders of engineering are not often seen during airshows or used for flyovers because of their cost per hour operation, but when they are, people can’t take their eyes off of them.

This flyby was caught by the YouTube channel spencerhughes2255 who’s got a large channel of plane spotting videos. This time he caught the B-2 during the annual Rose Bowl game in Pasadena, California. A college football game, B-2s have kickstarted the games for a few years now.

The B-2 Spirit is not only rare because of its stealth technology range as well as other specifications, but also because of its production numbers. Only 21 of them were produced between 1987 and 2000 at a whopping $2 billion price tag per aircraft.

They are worth it as you can imagine. Any country that has (and the U.S. is the only one) a heavy bomber that can penetrate deep into enemy territory without detection and deliver conventional and thermonuclear bombs is worth that much.