Ballistic Windshield Vs Minigun – The Results Are Stunning 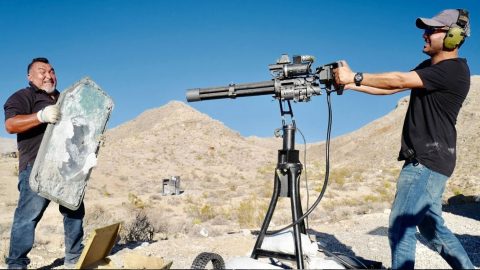 It’s that time again that the YouTube channel of Edwin Sarkissian has a new video up and it’s just as ridiculous as the last one. The last video we covered with him was when he was shooting a sniper rifle straight up to see how long it took the bullet to get back down.

In this new video, he got himself a minigun and put it up to a test. Getting a ballistic windshield from an active Marine that was used on an AMK 36 truck, he put the two together to see what would happen. You can see the results below.

The bullet-resistant glass was taken off a variant of the MK36 Wrecker truck. Built by Oshkosh, this Medium Tactical Vehicle Replacement (MTVR) is used to recover broken down / disabled vehicles up to 31 tons in weight. In addition, it is built to withstand the harshest environments and be able to navigate difficult terrain.

One of the additions to this variant was the ability to add armor. When in hostile environments and in need to retrieve cargo or other equipment, the Marines can count on this truck to get them in and out safely while performing their duties.

The choice of gun to put the ballistic glass to the test is the M134 minigun. It can fire up to 6,000 7.62 mm rounds per minute, making it quite a gun to go up against.

It is used by the Army, Navy and Air Force since 1963 and has a variety of applications. From C-130s to Hueys and Navy boats, this relatively lightweight gun can do a lot of damage in a short period of time.

Check out what it can do to that truck’s glass below though. You’ll be surprised.