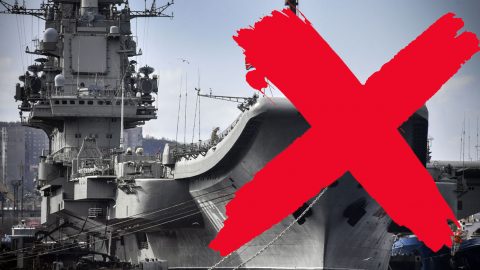 On October 30th, 2018, Russia’s only aircraft carrier, Admiral Kuznetsov, nearly sank when it was being repaired in a floating drydock (PD-50). As it was already in bad shape, it was put on this makeshift dock and was meant to be repaired and retrofitted with new equipment and expected to return to service in 2020.

Russia's only aircraft carrier damaged after crane falls on it https://t.co/f328GOBlC4 pic.twitter.com/zc12flXxqx

During this process, however, one of the massive cranes on the dry dock collapsed and put a 13 by 16-foot gash on the side of the hull. The dry dock then fell apart and sank, Kuznetsov narrowly avoiding sinking because it managed to float away from the collapse.

As of this writing, it is known that four workers were injured during the incident and one is missing and presumed dead.

Admiral Flota Sovetskogo Soyuza Kuznetsov, its official name, is Russia’s only aircraft carrier. It was launched in 1985 and has been serving ever since.

Meant as a carrier but also to defend submarines and other ships in the fleet, its operational history is a bit spotty. Powered by diesel fuel, it was seen spewing black, sticky smoke over the past decades and was once stranded dead in the water due to mechanical problems.

This is why in 2015 the Kremlin ordered an overhaul of the ship to keep it operational for the next few decades. As of now, it seems like that’s not going to happen.

PD-50 was Russia’s biggest floating dry dock which they imported from Sweden in the 1980s. It was one of the biggest dry docks in the world and also the only Russian one big enough for the job of repairing Admiral Kuznetsov.

According to many reports, Russian authorities stated the repairs to Admiral Kuznetsov’s are postponed indefinitely. This is partially due to the fact that with PD-50 now broken apart and 160 ft below water, Russia doesn’t have a dock big enough to fix its carrier.