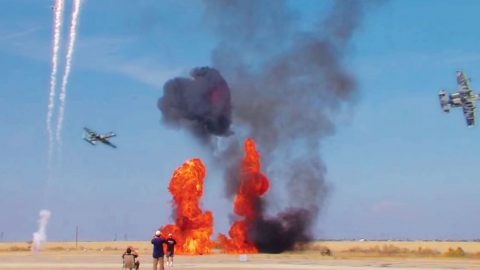 That’s What I’m Talking About.

A-10s are one of the most coveted planes in U.S.’ arsenal. Any aviation enthusiast could pick one out of a lineup in addition to adding a few details that make it so great. It’s the ultimate CAS platform because of its legendary gun, namely, the GAU-8. The pilots sit in a titanium bathtub which protects them from the ground fire as they swoop down close to the ground. The list goes on and on and most people know these features because they’re almost legendary.

As an added bonus, you’ll see a malfunctioning A-10 make a perfect landing while missing one gear.

It’s still baffling as to why anyone would want to discontinue the use of this aircraft. With talks of the F-35 coming in as the primary role attacker/fighter, the days of the Warthog could be numbered. Aside from that, however, we’re glad there are many out there still passionate about the aircraft, even going as far as making it a hobby to fly them.

It’s no surprise then that the guys in this video chose to model their RCs after these badass planes. As you’ll also see, they were not messing around when they were flying them. Not only are their planes huge, the whole show was choreographed to a “t.”

The two RC pilots were trailing each other the whole time in a nice, scale way. Strafing the airfield for the spectators, they get down low and to top things off, there were pyrotechnics involved. When the planes were closest to the ground, giant fireballs erupted, adding to the grandeur of the show.

Check this out and see for yourself. It’s pretty spectacular.