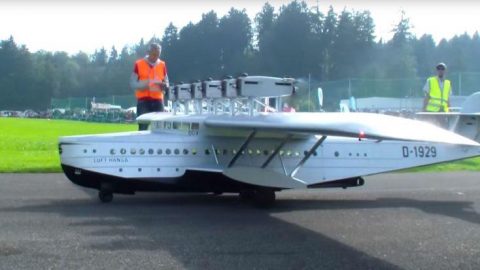 When it was introduced in 1929 the Dornier Do X was the biggest plane in the world. The Dornier DO-X flying boat would reign supreme as biggest until 1942 when the Boeing B-29 Superfortress was introduced. Now the iconic flying boat has been miniaturized as an RC model, but it’s still pretty damn big.

The Dornier Do X was developed as a long-range luxury airliner created by Dr. Claude Dornier. The flying boat could accommodate 150 passengers, featured three separate decks which included a dining area, smoking room, full bar and sleeping berths. Only three Do X units were built and ultimately went into financial problems and the plane’s use was discontinued.

“The Do-X made its first test flight on July 12, 1929. A few months later, it carried a world-record 169 passengers on a 40-minute flight. Passengers were asked to move from one side of the cabin to the other to help the captain bank into turns.”

Now an RC model of the Do X takes center stage at the Flugtag Hausen airshow. This RC is massive, eclipsing the sun as it flies overhead revs its six engines. The real Dornier Do X may not have been able to get more than 40 feet off the ground but this RC can really soar.