2 Hikers Get Buzzed By Warthogs 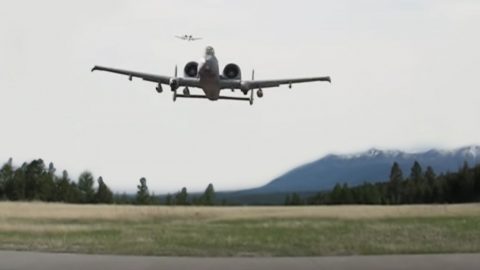 Hopefully, It’ll Make Yours Too!

We’re not exactly sure why or how these guys were there, but judging from their other videos on Youtube it seems like they are hunters. With a woodsy and mountainous setting in the back, we’re assuming that the guy that captured this footage and his buddies were just strolling through the woods when all of the sudden they were greeted by not one, but two A-10 Thunderbolts. More often than not called Warthogs or just Hogs, their pilots just kept on doing low flybys and looping around for another set.

A-10’s official name is Thunderbolt II, a name which comes directly from the P-47 Thunderbolt that was used during World War II.

Warthogs were the only planes ever developed specifically for CAS (close air support.) Entering service in 1976, the entire plane was actually built around its gun, namely, the GAU-8 Avenger rotary gun. Able to fire up to 4,200 30mm rounds a minute, this plane/gun combination is the most effective CAS platform ever built.

It is also the safest plane for its pilots as well. With a myriad of precautions taken in design stages, engineers knew this aircraft would be taking on a lot of enemy fire. For this reason, the engines were taken off the wings to decrease the likelihood of fires. Also, the pilots sit in a 1,200 lb. titanium armored “tub,” protecting him from small arms fire while strafing.