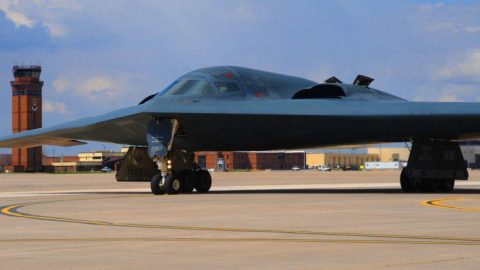 Be There In Spirit.

B-2 Spirit is the most famous of all the stealth aircraft despite its attempts to remain hidden. Not all bombers are created equal so they have to play to their strengths and the B-2 has a few. The big advantage of the B-2 Spirit is that it is the most reliable bomber for missions half a world away due its incredible flight range.

Sending stealth bombers to combat hostile targets ensures that few lives are put at risk and that pilots can return to base after the end of a full day. Enemy nations often think that they can gain a strategic advantage on preemptive attacks by pinpointing the location of aircraft carriers. But a stealthy bombing strike takes away any edge that the opponents think they may have.

“There’s definitely a strategic signal every time the military does these long-range missions. The message that’s being sent is that we have the capability to bring significant firepower on targets anywhere in the world.”

In this video, you can see a trio of B-2 Spirits deploying from Whitman Air Force Base and meeting up with a KC-135 to extend their flight range.