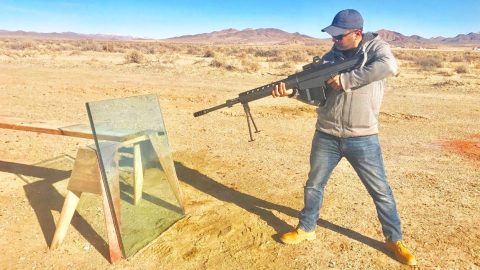 Maybe They Should Rename It?

We get that the manufacturers of bulletproof glass are selling to a different market such as banks and other highly targeted establishments, but for military use, it might be useless.

Especially if you shoot at it with a 50 caliber rifle.

We’re glad to say that after years of writing for you folks, we just found a YouTube channel we weren’t aware of. Named Edwin Sarkissian, this dude makes some killer firearm videos. From this one here to shooting an ATM with a pistol to see what the damage would be, if you can think it, he’s probably already done it.

The rifle he uses in the video is a Serbu BFG-5A which retails for about $7,350.

Watch this neat video below and see the 50 cal damage for yourself and if you like it, let us know and we’ll comb through his channel and pick out some of his most interesting ones.