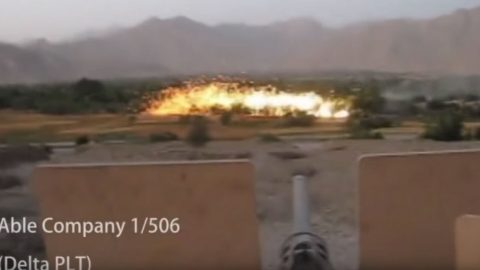 Every grunt that has ever been under the protective wing of an A-10 Thunderbolt II will tell you that there’s no better sound to hear than those whinning engines when you’re in trouble. Then, you see flashes on the ground, a few seconds later hear the all too familiar “brrrrrt,” and more likely than not you’re in the clear.

In this footage, you’ll see the soldiers from the 506th Infantry Regiment call in air support as the enemy was probably in the treeline ahead. The soldier manning the M2 on top of what appears to be a Humvee recorded the strafing run of the Warthog his Comany just called in.

It was a glorious thing to see, that’s for sure.

With the GAU-8 sticking out of its nose, the A-10 can deliver about 65 30×173 rounds a second. If you’re the one those are flying towards, you shouldn’t run as you’ll only die tired.

Check out the video below of this plane and pilot doing what they do best.