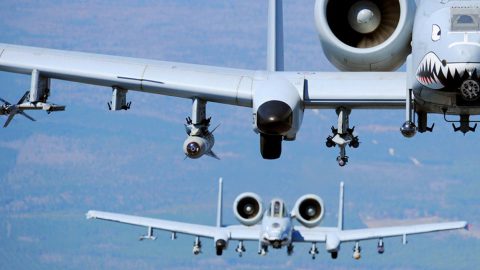 The A-10 Warthog is the jet that simply refuses to die no matter what you throw at it. This includes attacks from politicians who constantly try to sabotage it in favor of newer aircraft. Many of the A-10s are nearing the end of their flight cycles as their wings deteriorate, but a guardian angel came in to save them.

Air Force Secretary Heather Wilson has heard the call of A-10 supporters and it has not fallen on deaf ears. As over 100 A-10s reach the end of their service life and face grounding Secretary Wilson has ordered new wings to keep them flying.

As a former A-10 pilot Secretary Wilson knows the value of having well-equipped close air support planes in a combat zone. I think we can all appreciate the fact that there is someone in a position of power that isn’t in it for Government funding contracts but wants something that works.

Lately, Secretary Wilson has been a supporter of the Air Force Light Attack Experiment which will put cheaper aircraft into uncontested airspace. However, she knows the value of the A-10 Warthog and though it may not go back to productions lines, they are still the best plane for the job they do.