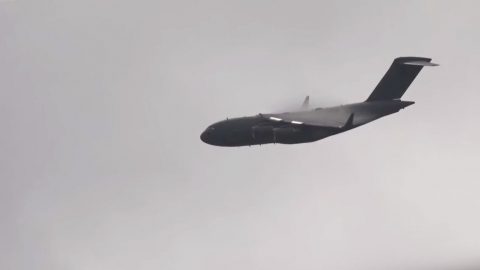 Here’s something you don’t see too often. The YouTube channel bobsurgranny just got some awesome footage of a C-17 Globemaster III wrapping itself in vapor for a bit. The conditions were just right as it was a moist, overcast day which made it possible for the top of its wings to be coated in that elusive vapor.

Now, before anyone starts getting up in arms about supersonic flight and whatnot. We’ve done a few posts about F-18s and even B-52 showing vapor cones and people always correct us that they’re not caused by going faster than the speed of sound.

We know that. Thanks.

Vapor cones and vapor streaks are caused by air pressure around the plane getting cooler than the dew point, thus forming a cloud. It is common to see a shock collar around a plane flying at supersonic speeds, but it doesn’t mean that it only happens then.

Take this C-17 for example. Their top speed is just over 500 mph and this one is flying nowhere near that. The vapor is still visible.

So, after defending ourselves in advance, enjoy the video.