Gigantic Ship Crashes Into Crowded Beach At Full Speed – Keep Your Eyes On The Impact! 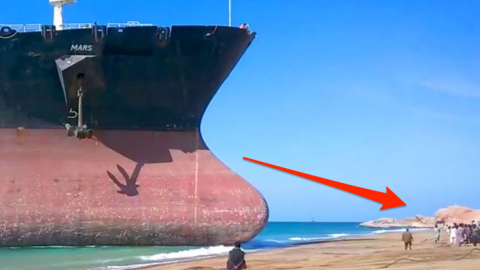 There has been a lot of talks lately about massive cargo ships ramming into naval vessels. Two Navy ships have sustained major damage after colliding with cargo ships several times larger than themselves. It is no secret that cargo ships can leave a pretty big mark, but every once in a while they are crashed intentionally and there is a beach dedicated to it.

In Pakistan, there is a beach called Gadani where these huge cargo ships to meet their fate. A long stretch of beach near the city of Karachi is a home to a ship graveyard where these vessels are intentionally grounded. Crews swarm the beached ships like ants and pull off metal to be scrapped.

In order to get these ships scrapped, they have to be delivered Gadani in the first place. There is not a whole lot of regard for safety along these beaches and the ship crew isn’t paying much mind. But these folks do have to make a living and what better way than tons upon tons of scrap metal right for the taking?

So without further delay watch as they ram this gigantic cargo boat full-steam into this crowded beach.