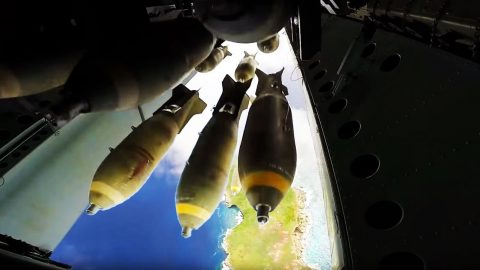 That’s Quite A Scenic Bomb Run, That’s For Sure!

This massive bomber is considered the offspring of the B-29 Superfortress and the grandchild of our World War II icon, the B-17 Flying Fortress. If you think about the size and power of the B-52 Stratofortress, it’s amazing to figure that this machine is still in service today when its first flight took place just 7 years after the end of World War II. Between the size, firepower and sheer effectiveness, these warbirds are capable of dropping 70,000 lbs. of bombs in one run.

The B-52 was called Stratofortress by Boeing, but it’s commonly named Buff, which stands for ‘Big Ugly Fat F***.

This video taken from a GoPro captures the most incredible angle of this practice bombing run. Guessing by the looks of the water and the island, it took place somewhere over the Pacific and it’s absolutely beautiful. What’s more, the island looks extremely narrow, as the bomb blasts seem to take up at least a quarter of its width. The bomber crew nails it dead center though, with the bombs being placed right where they needed to go.